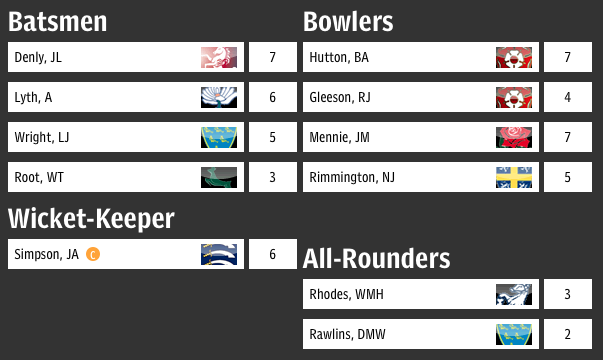 The above is my first XI. It’s in the all-rounder roles that I’ve gambled with Rhodes and Rawlins. Rhodes has moved from Yorkshire to Warwickshire so should see increased game time and will be keen to show what he’s capable of. Rawlins made an impression in the North v South matches and this should be his breakout season. Simpson is a reliable wicketkeeper and I think there is real logic in the stumper being captain. I’ve plucked for a possibly slightly under the radar bowling attack and expect Mennie and hopefully Hutton to contribute runs too. I’ve very deliberately selected batsman that will at least occasionally bowl and should get opportunities in both formats of the game.

For my second XI, I’ve gone for the two all-rounders that I consider guaranteed runs and wickets. I’ve opted for a reliable batting unit and expect Fell to return to form this year. Though my bowling unit may not be guaranteed outings in both codes, Coad and Footitt are wicket takers in the First Class format. Mahmood is coming into the campaign off the back of impressive performances in North v South and Nijjar, a useful spin bowler, has been opening the batting for Essex pre-season. What happens to Alastair Cook with England may determine Nijjar’s opportunities. If Roderick is available throughout the season, he should be steady away behind the stumps and with bat in hand. 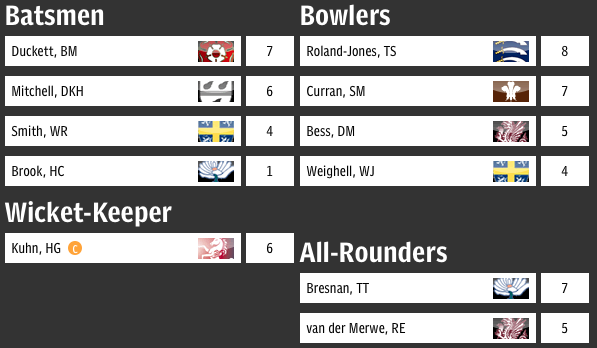 Have I ever mentioned that I like Ben Duckett?

Mitchell is as consistent as they come and bowls too. Smith has returned to Durham and I expect plenty of runs from the experienced head back up north. Alongside him, Brook is primed for his breakthrough campaign after debuting last term. Kuhn may not keep wicket but is a solid performer at domestic level. My bowling attack may receive England and England Lions call-ups but have runs as well as wickets in them in both formats. Bresnan is as solid an option as Patel and Bopara and van der Merwe is a destructive player. 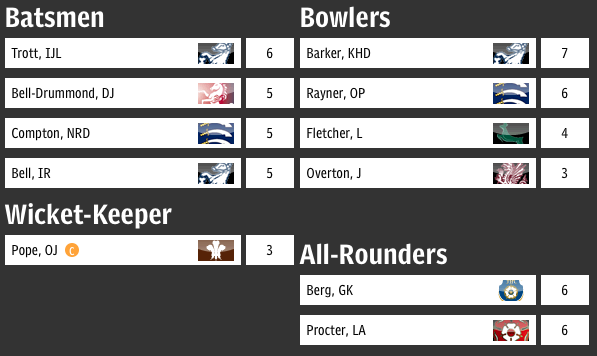 In my fourth XI, I’ve gone Warwickshire and England veteran heavy in my batting line-up, messrs Trott and Bell leading the charge. Bell-Drummond will be looking to kick-on and fingers crossed for a run-filled renaissance from Nick Compton. Like Kuhn, Pope may not always keep wicket but will be playing regularly and in the runs this year. Berg is as reliable as anyone with the ball and Procter prospered last term having relocated to Northamptonshire. I want a bit more from Barker and Rayner this year. Fletcher is back from injury and if Overton, rated 3!, can stay fit then he’s a shrewd selection. 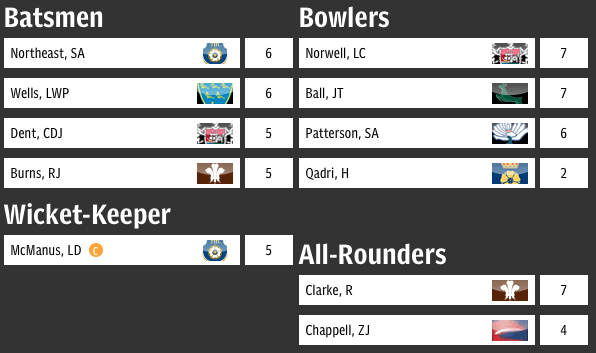 In my fifth XI are the other players that I like who I couldn’t squeeze into my first four teams. Northeast has moved to Hampshire but is as reliable as they come with the bat. Wells is solid in the First Class game as is Burns. Dent is an under rated player too. McManus gets the gloves with the experienced Clarke, back at Surrey, and less experienced but quick Chappell in the all-rounder roles. Hopefully Norwell has shrugged off any injury niggles. Ball will be left to play county cricket this term whilst Patterson is another of my reliable picks. Qadri made an impressive debut last year and will look to back it up.

As I’ve mentioned before, I’ve avoided selecting players that will be on England duty. It’s steady away county pros that you need sprinkled with one or two yet to be discovered gems just primed to be this year’s Ben Coad.

Let me know what you think about my teams and which one is likely to win me the massive cash prize of……….. £3,000!

Disclaimer: I’ve since been tinkering away, so my teams don’t look quite the same as above. I’ll keep you up to date once the campaign commences!