If you were struggling to stomach The Hundred then 3TC is likely to make you choke on your cornflakes! But do you know what? Having watched the little explainer video on YouTube… I actually quite like the idea!

Yes it’s another South African cricket competition that isn’t going to get off the ground as anticipated and how practical three-team international matches outside of a major tournament would be is debatable but it seems like it could be really exciting.

One thing the video doesn’t make clear but is presumably easy to figure out is that if a batsman is left on their own then they have to keep walking back to the other end to be on strike even if they ran a single or a three.

Excuse my laziness but please watch the video presented by Mark Nicholas via the link above that does a better job of explaining it than I would. It seems really dynamic and like I say, I like the idea… though it’s probably not desperately necessary to rush to commence it in a coronavirus hotspot in the middle of the South African winter! 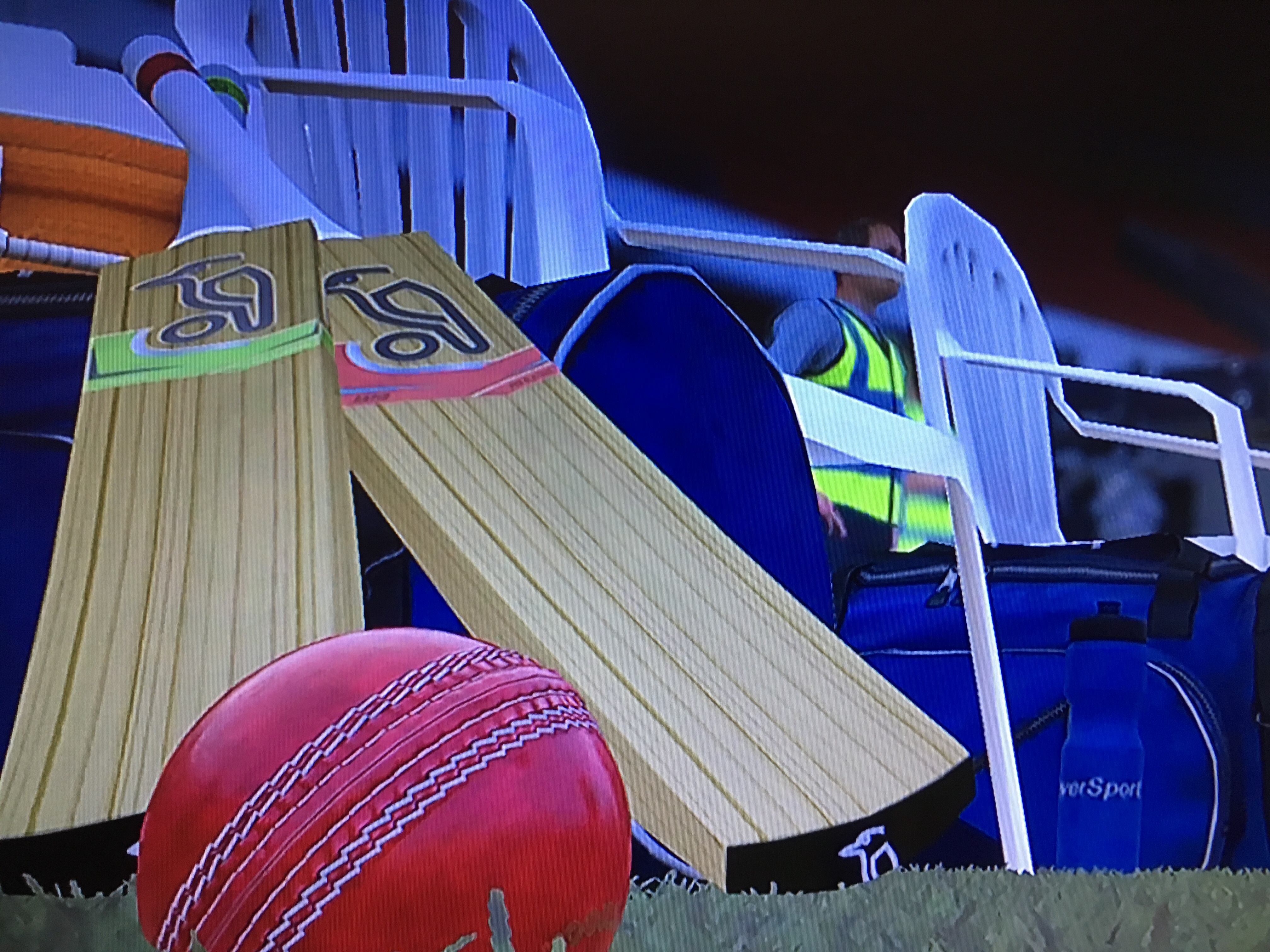 Our man Buster van Dunk put the negative press to one side this week and made his First Class debut for Centurion at the impressive Highveld Oval. Some pessimists in the media have criticised the teenager’s selection following some middling performances on the club circuit but the talent is clearly there in abundance.

BVD looked at ease against pace in his first innings, soon dispatching national spearhead Kagiso Rabada to the boundary but operated less comfortably against spin. He’d made 22 batting at 8 before an inauspicious end, out caught at slip when failing to execute a reverse sweep as intended.

The off-spinner then toiled for 34 fruitless overs. He traveled at only two per over before leaking a little when experimenting with bowling around the wicket to the left-handed batsman but figures of 34-7-77-0 were by no means a disaster. Hosts Highveld declared just shy of 500 having lost only five wickets in a chastening experience for the Centurion bowlers. Experienced internationals Temba Bavuma and Rassie van der Dussen were amongst the runs. Generally Buster bowled with control and whilst the threat wasn’t persistent he did at least beat the bat on a few occasions.

It was van Dunk’s 35 not out from only 26 deliveries in Centurion’s second innings that ensured Highveld would have to bat again. They wobbled somewhat losing three wickets when chasing only 16 runs for victory but the result was never in doubt.

Next up it’s a home debut against Bloemfontein as Buster goes in search of his maiden professional wicket in front of his home fans.

Our man Buster van Dunk will make his First Class debut for Centurion this week at the age of just 19. 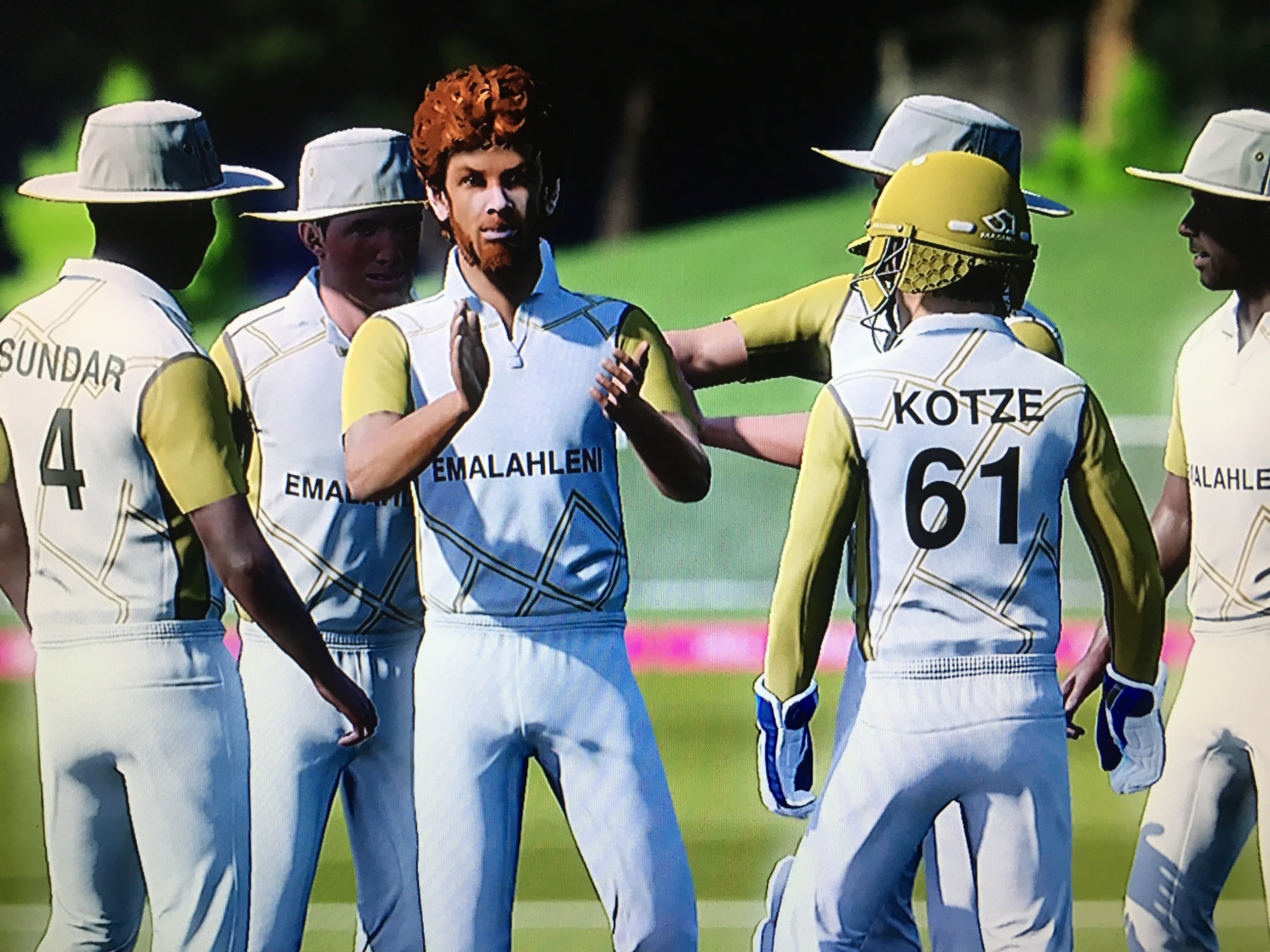 Wickets haven’t been easy to come by for the young off-spinner but his economy rate has caught the eye of many domestic sides who desire some control in their bowling ranks.

The left-handed lower order bat also has five fifties to his name and averages just shy of forty with willow in hand at club level.

On top of his batting and bowling exploits, South Africa’s great spin hope has demonstrated his nous when captaining club side Emalahleni to great effect during the current campaign.

Centurion have signed van Dunk for the pro 50-over competition too.

We’ll bring you further updates as van Dunk announces himself on the professional scene.

He’s funkE with a capital E!

He’ll take a shedload of wickets, you just wait and see!

Will the famous Emalahleni crowd chant make it to the stands of Centurion?

Unlike the grassy green decks across South Africa, the wickets dried up for our precocious young spinner in his first campaign, so he would’ve been keen to make an early impression in his second season on the club circuit. 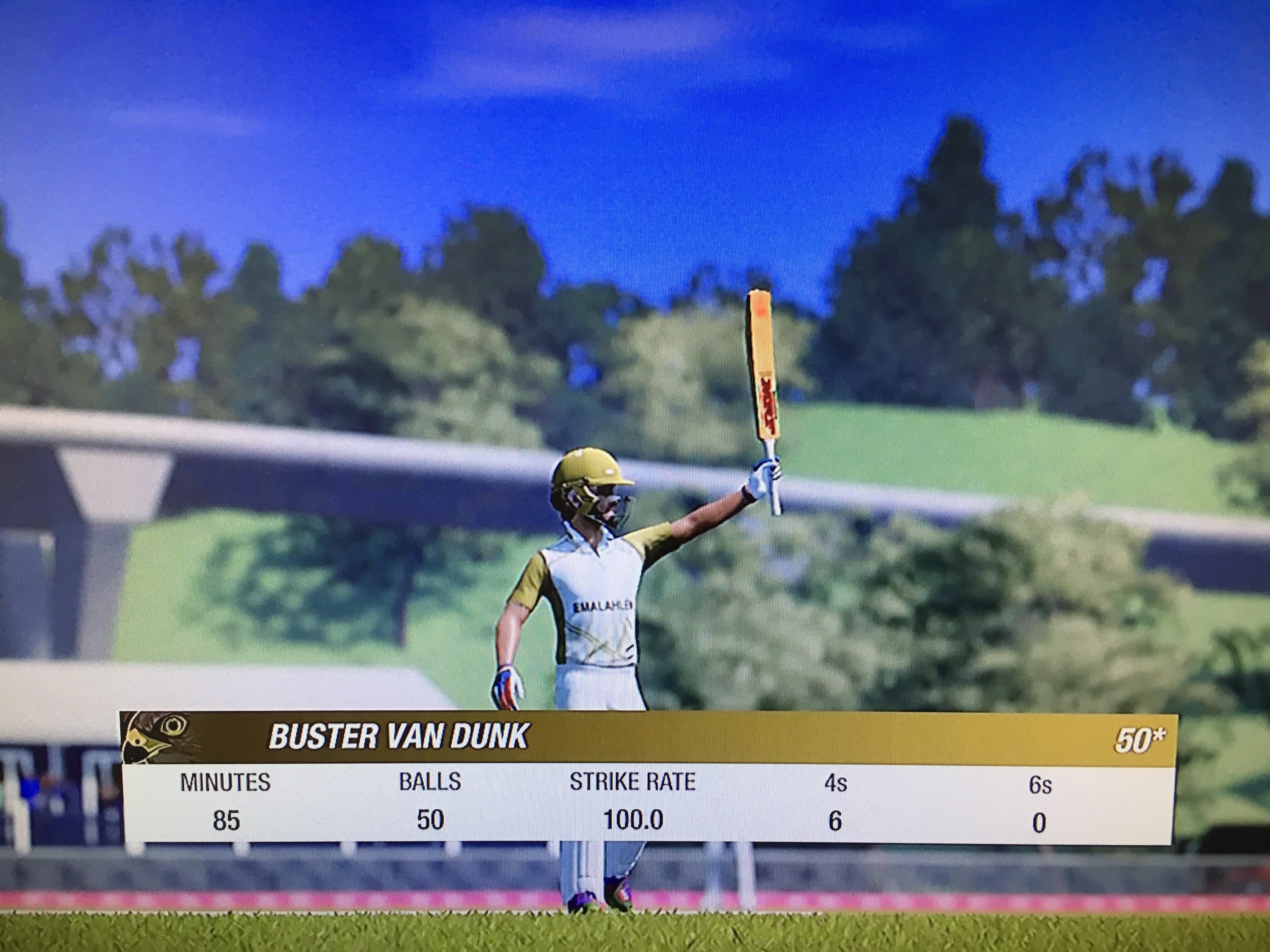 It was with the bat that van Dunk got people talking though, making two undefeated fifties in the opening 3-day match and looking in phenomenal form. The nineteen-year-old finally ended his drought with the ball too, when he snapped up a wicket in the opening T20 match.

Given that Emalahleni won their opening match in each format, van Dunk was as surprised as anybody to be offered the captaincy. He duly assumed the responsibility though and opted to change the entire line-up for his first match as captain. This decision was in order to breed competition among the players. In the short term at least, it backfired spectacularly! Bowled out for scores of just 90 and a pathetic 41 in their second innings, Emalahleni succumbed to a whopping 435-run defeat!

Though Buster claimed a wicket in the next one-day game, another loss, the captaincy was clearly effecting both his mindset and performance. A corner was turned with a win in the T20s though. Remember that Emalahleni are the defending champions in that format and have now won eight on the spin.

Buster learns fast and now seems to know what his strongest XI is. The common consensus is that Ema will bounce back in their next 3-day game and they better make the most of having young Buster around. Pro South African domestic sides are sniffing around and even States in Australia are eyeing recruiting the Ginger Spin King as an overseas player. Watch this s e!

I just couldn’t get into another career as myself so I’ve started a new one… introducing South African spinner Buster van Dunk aka The Highlight!

Van Dunk is an off-spinning lower-order batsmen. He bowls right-handed but he bats left-handed… because van Dunk is funkE with a capital E!

He’ll be representing Emalahleni at club level and hopes to go onto be selected by Centurion Heroes and of course his beloved South Africa. Centurion, Mookgopong, Pretoria, Soshanguve and Tzaneen are the beautifully monikored teams that Buster will come up against.

Van Dunk Da Funk will wear number 69 on his shirt because it’s his favourite… number!

There’ll be no mucking about with Buster. He’s keen, confident and expects to be in the national side before he hits 20. South African cricket needs a hero and in Buster Alphonso van Dunk, they might just have one!

Disclaimer: Selection Difficulty may or may not be set to Easiest! 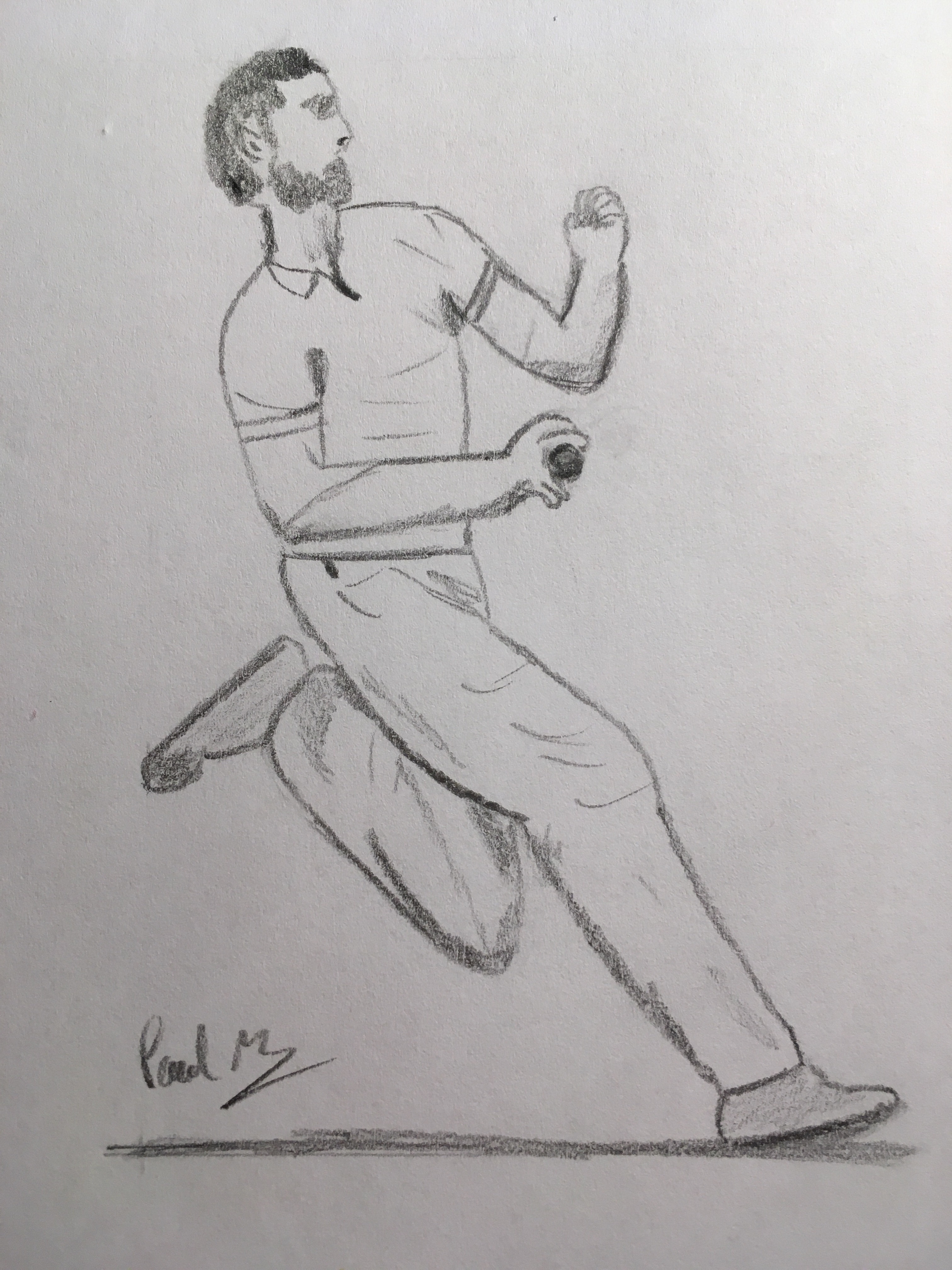 As you well know, in-form South African paceman Duanne Olivier has packed his bags for the land of tea, water and Emmerdale… Yorkshire!

That move is disappointing in itself. I’m a Yorkshireman but maintain romantic notions when it comes to international sport. I’d like to see a top player want to perform for his/her country.

The quota system in South Africa probably requires a post of its own. Maybe I don’t even understand it properly.

Olivier, capped ten times at Test level, now says that he wants to play for England. Well I don’t want him to! Does that make me xenophobic and/or a hypocrite? Possibly.

My wife is not from England. She has come to this country and worked here, therefore potentially denying a willing English person that job. Regardless of Olivier denying an Englishman a place in the Yorkshire team or enhancing the quality of the league, he has represented South Africa as an adult. My opinion is that once you’ve made your bed then you must lie in it.

I can understand sportsmen and women switching allegiance from junior level. Nationality is not always as simple as people being born in one country to parents both from said country and being brought up there until adulthood. My daughters are English born to an English father but will still be exposed to a lot of French culture and language here in England before we even consider their visits to France. If they become athletes, I’d have no qualms about them representing France. Of course Jofra Archer, despite having an English parent (And see KP etc) has to qualify to play for England.

Of course there are many previous examples all with varying circumstances but I’m very uncomfortable with the possibility of Olivier pulling on an England shirt.

I have absolutely no problem with a person from any country living and working, including next door or alongside me, in this country but if they relocated as an adult then I wouldn’t expect them to represent our nation at international sport. If I lived in any other country, I wouldn’t say that I was that nationality just because I’d spent two thirds of each of three years living and working there.

There’s an argument that international sport needn’t exist. That we shouldn’t divide ourselves in such ways. There’s no balance between populations, it’s just politics and land grabbing. But if international sport does exist, I don’t think that you can change your mind in your late twenties and switch allegiance. My wife might gain British citizenship but she’ll have been here a lot longer than Olivier.

That’s my piece and I’ve said it. 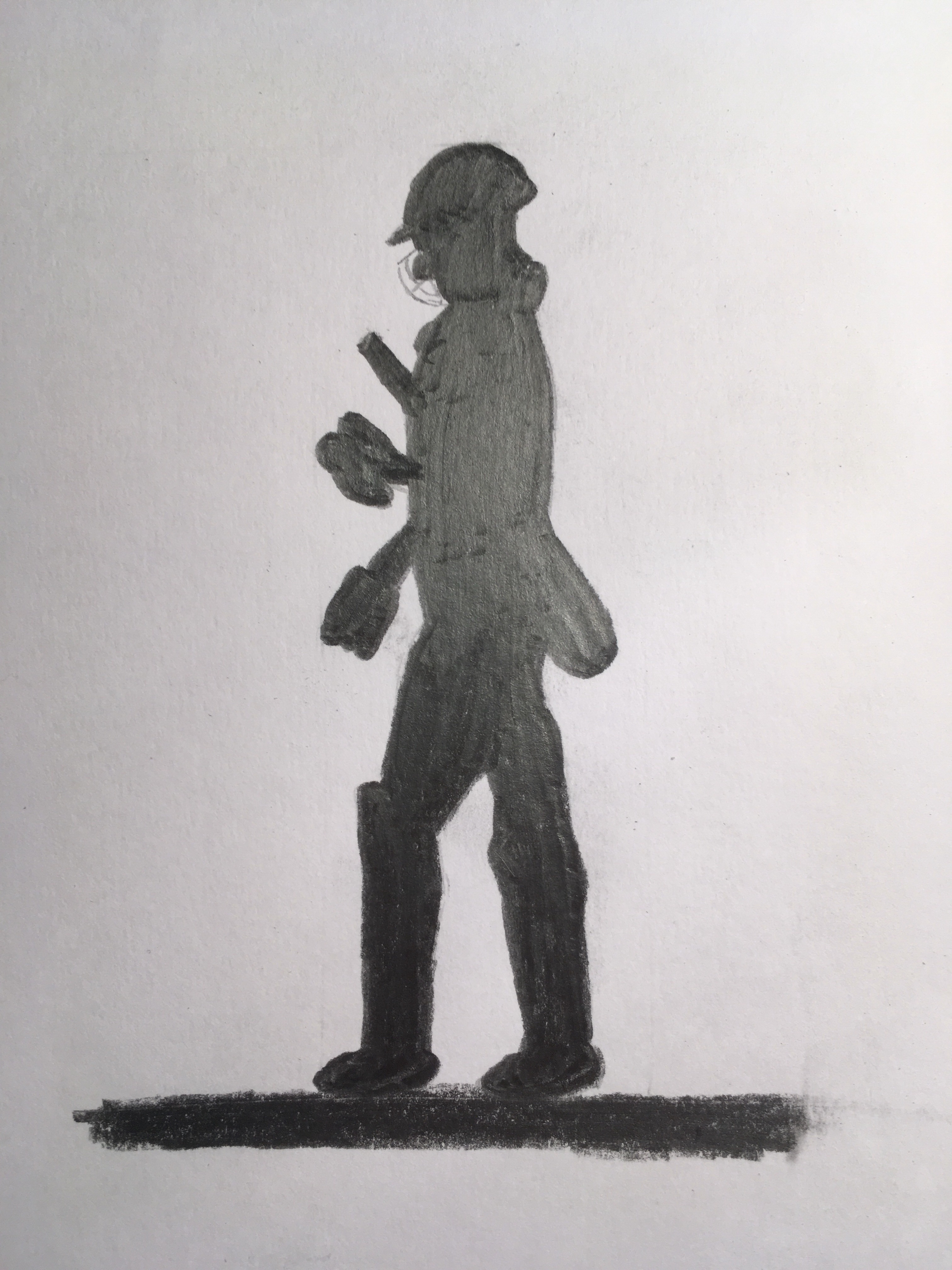 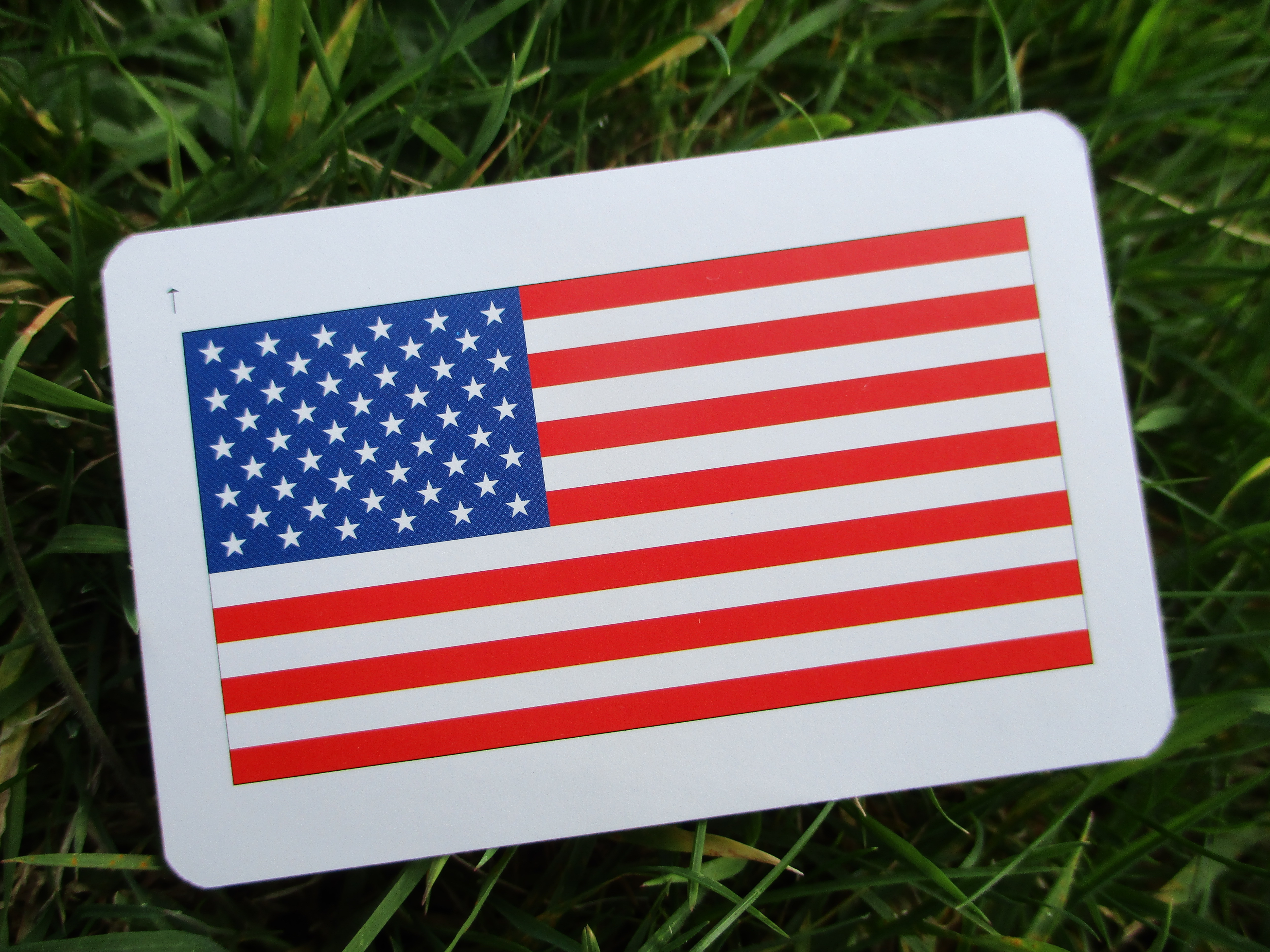 USA return to the fold. United States of America have had their member status restored…

England discard Dawid Malan has signed a new contract with Middlesex that will keep him at the club until the close of the 2021 campaign. Malan is currently skipper at Lords and is joined in committing his county future by former Glamorgan man James Harris. Harris, once a player seemingly destined to play for England, has at least developed into an important player for his adopted county.

Wide: A player you’d (Or I at least!) had completely forgotten about, has actually gone on to have a productive career… with a First Class average the right side of 40! The things you learn when scrolling through scorecards the world over…

If England win this summer’s Ashes or/and World Cup, then we could have a host of new MBEs!

The likelihood of the pair playing in the Ashes and possibly earning knighthoods will be defined on the Test tour of West Indies. No disrespect to the current Caribbean collective but if you offered an opening batsman an away destination to cement their place in their own team then West Indies would currently be high on most player’s list.

Jennings was previously dropped on the eve of a home series against West Indies. He’ll hope not to be dropped post a Caribbean encounter this time. He played spin well in Sri Lanka and was razor sharp in the field but questions of his ability against pace linger. Based on the evidence and scars inflicted by South Africa, answering those questions against Australia won’t be easy!

Burns performed well in the second Test in Sri Lanka after a disappointing debut. He failed in the final Test however and his aesthetics aren’t to everybody’s pleasure. If he leaves the door even slightly ajar and some young gun plunders runs on the county scene or even Surrey teammate Jason Roy produces a run gluttonous World Cup then Burns will follow another Surrey man, his opening partner Mark Stoneman, back to the county game and with little chance of a Jennings style recall.

Should KJ and RB perform well in West Indies, help England regain the Ashes, go on to score a few thousand Test runs and even captain England (They’ve got experience) then maybe they could yet join Alastair Cook by having a new prefix!

Face it folks, Christmas is over… so it’s back to the cricket and there are Test matches galore all over the globe this Boxing Day…

Australia are hosting India where Mayank Agarwal has registered an encouraging 76 on debut for the touring side:

Sri Lanka take on New Zealand for whom Tim Southee struck a typically Tim Southee-like 68 to rescue his side from the depths of 64-6 to what will be a competitive 178. He then went onto claim three wickets before Sri Lanka planted the seeds of recovery:

Meanwhile in South Africa, Imam-ul-Haq is already back in the hutch having dined on duck not turkey for visitors Pakistan: