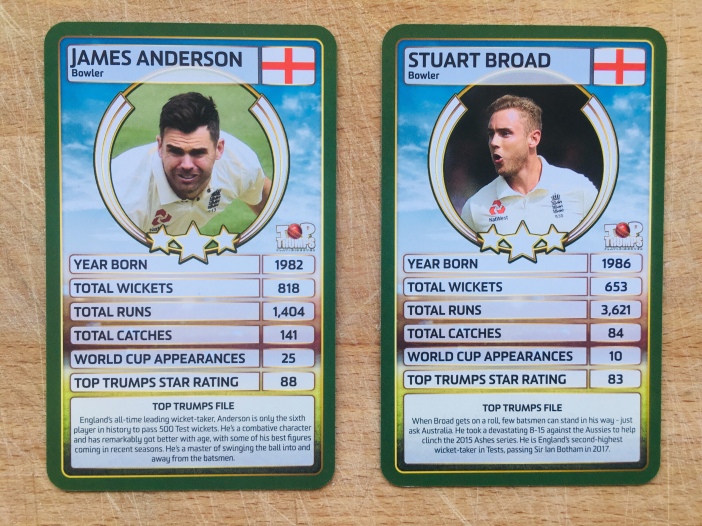 James Anderson and Stuart Broad won’t be around forever, so who can fill the void for England when these two have rolled into retirement?

In English conditions then Chris Woakes and Sam Curran should be reliable options but overseas it’s a different story. 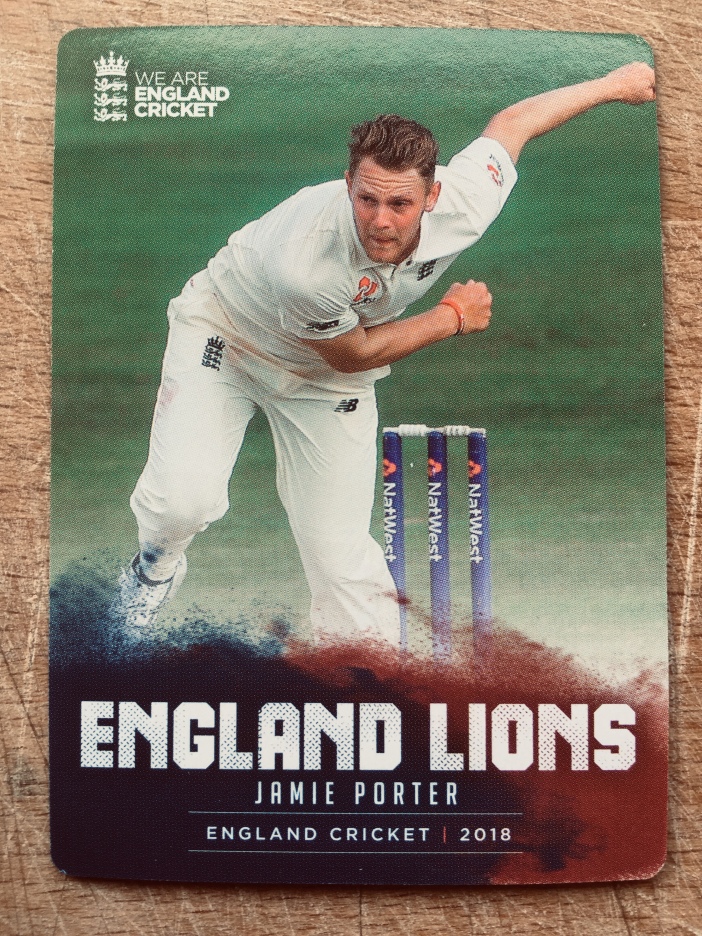 Is Porter destined to be a nearly man?

He continues to take wicket upon wicket at domestic level but by the time Anderson and Broad have departed, will the ship have sailed for Porter?

The spearhead of Essex’s attack has overcome injury, not unlike Anderson and could be primed to fill the void.

Yorkshireman Coad is behind Porter in the pecking order and is absurdly still awaiting Lions recognition. Any suggestions of him being a one season wonder have already been dispelled. Another campaign of the sort he’s had in recent seasons should surely see him knocking the door down.

Anderson’s Lancashire colleague Bailey had nearly slipped under the radar despite his regular ripping up of wickets on the county scene. This winter however he got the recognition he deserved with a call-up to the England Lions squad.

Has he learnt a few tricks from England’s record wicket taker that he can bring to the Test arena himself?

Were it not for injuries then Somerset’s Jamie Overton may have already debuted for England. His extra pace and bounce would be welcomed on Australian decks (Hopefully by England, not Australian batsman!) but can he last five days or even ten overs? 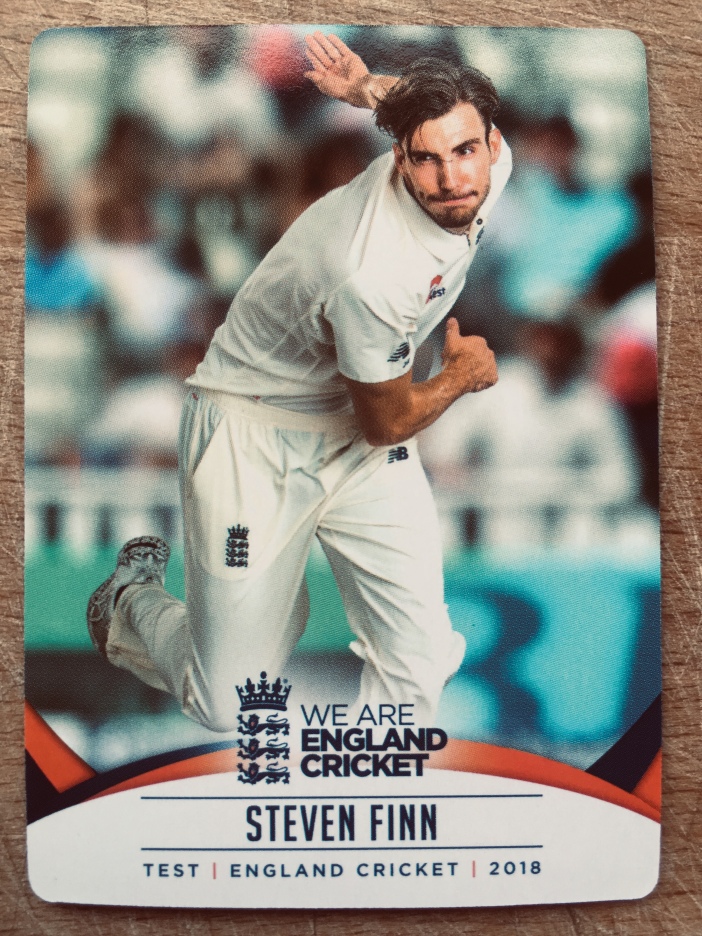 254 international wickets but little case can be made for selecting Middlesex man Finn. If he can hit the ground running in 2019 however and snaffle a giant bag full of wickets then maybe England could yet get the best out of him.

There are plenty of other options and it will be interesting to see who England turn to when the time comes to… fill the void! 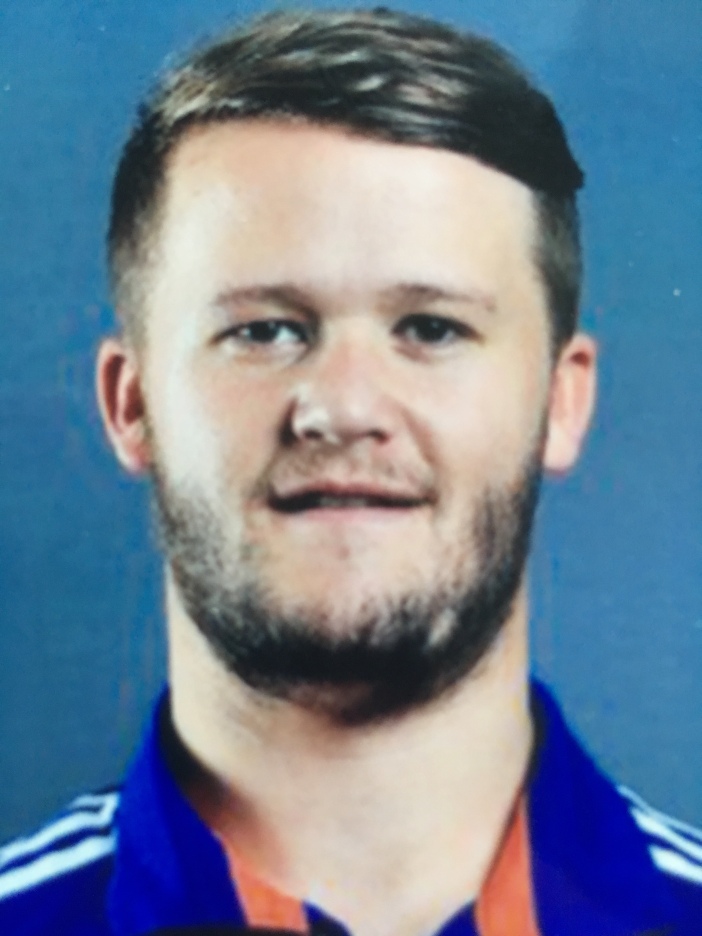 Batsman Ben Duckett has been recalled to the England fold meanwhile there is also a fully merited call-up for Lancashire seamer Tom Bailey and an exciting selection in spinner Matthew Carter for England Lions’ tour of India this winter.

With an ODI World Cup and Ashes series on the horizon next year, this is as good a time as any to stand up and be counted for ‘The Pride’! 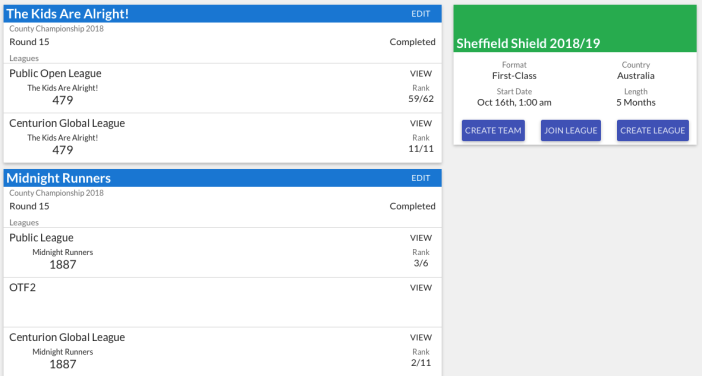 At the start of the year I stumbled upon CricketXI, an alternative fantasy cricket competition. This game focused purely on the County Championship (First Class) campaign. 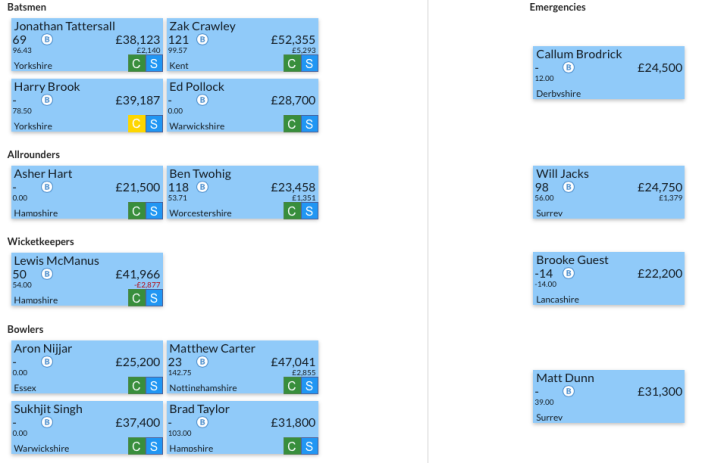 I selected a team of young guns and as you can see things went really well! It was great to see the likes of Jonny Tattersall, Zak Crawley and Will Jacks develop. Harry Brook, Ben Twohig (Love his name!) and Matthew Carter also made great strides.

Unfortunately Surrey pacer Matt Dunn got injured early in the campaign and disappeared from the professional radar once again. Wicketkeeper Lewis McManus lost his place in the Hampshire First XI. Teammate Asher Hart and Essex spinner Aron Nijjar (Who fooled me by playing in a pre-season university match!) couldn’t get near their respective first XIs. Neither could spinner Sukhjit Singh who was sadly released by Warwickshire at the end of the campaign. Warwickshire clearly have little interest in developing their own young players and much prefer to sign absolutely anybody. While that’s great for players like Will Rhodes and Olly Stone, it’s not for players like Singh and Andy Umeed. 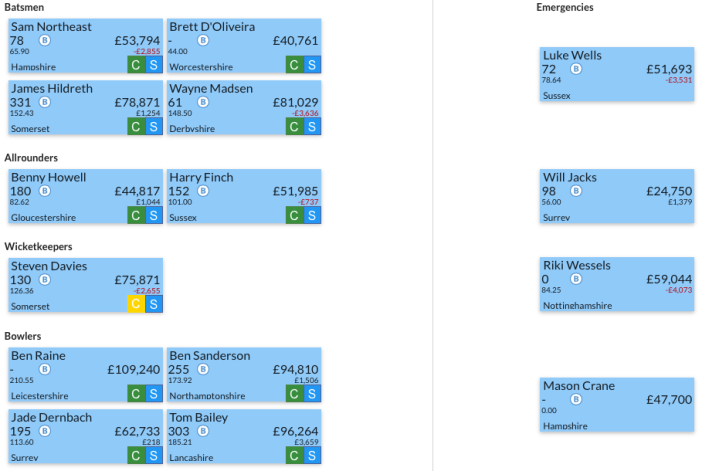 As well as my outfit of kids, I also selected a more ‘serious’ side but following early season injury, Sam Northeast failed to really get going having relocated from Kent to Hampshire and has fallen way down the England pecking order. Disappointingly, Sussex batsman Luke Wells and Nottinghamshire’s Riki Wessels failed to back-up productive 2017 campaigns.

On the plus side, James Hildreth was amongst the runs as ever, meanwhile Tom Bailey, Ben Sanderson and everybody’s favourite ex-England cricketer Jade Dernbach, contributed with the ball.

It says it all that my Fifth XI finished the 2018 County Championship campaign as my top team! 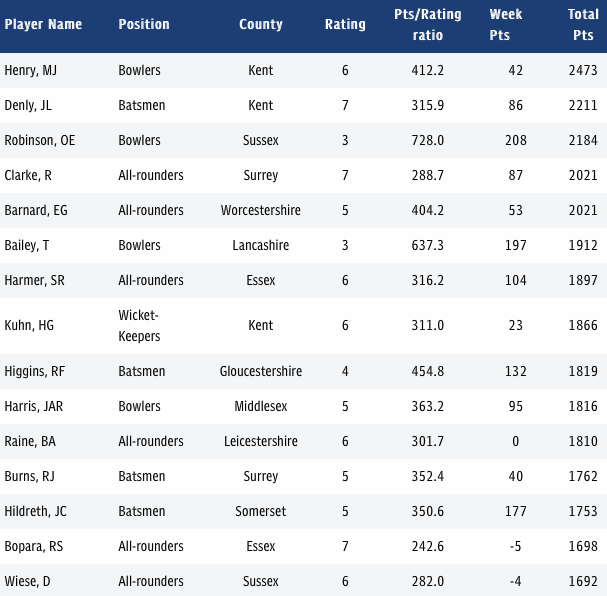 … having been consistent performers throughout the campaign. Please remember that this competition was specific to the County Championship (First Class) and One-Day Cup (List A). The T20 Blast had a completely separate fantasy competition.

My five teams did at least resign my wife and daughter’s XIs to the bottom of the family table. Anyway, there’s always next year! 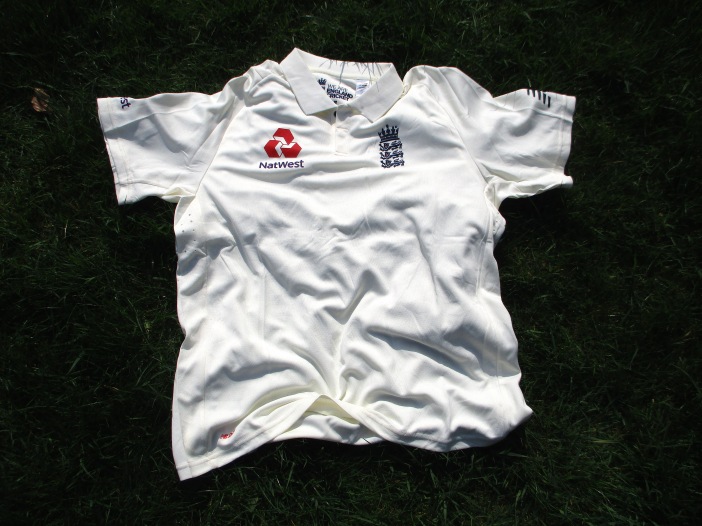 Imagine that England’s cricketers have gone on strike. They’re upset about that car sponsorship deal ending or they all want to play in the new Kazakhstan T20 league. England’s selectors are reluctant to return to players that’ve failed to produce the goods at international level before. They decide to select an extremely experienced squad so ignore the likes of Ollie Pope, Joe Clarke and Sam Curran amongst others. The below is what an England Test squad might then look like.

I’ve selected Northeast as captain so as not to burden either of my openers, Adams and Mitchell who make for a strong left-hand/right-hand combo. Hildreth is at four ahead of Stevens and Barker who provide all-round options with Barker’s left-arm variety essential. Simpson dons the gloves meanwhile Patterson and Rushworth take the new ball backed up by Fletcher as well as Barker and Stevens. Spin options are a bit limited but Luke Wells makes the touring party as spin back-up to Ollie Rayner. Steven Mullaney makes the squad as 12th man, providing strong all-round cover with bat and ball.

As well as Wells and Mullaney, Wessels and Harris provide a good variety of cover. Brown backs up behind the stumps whilst Wessels is also an emergency ‘keeping option.

Disclaimer: The likes of Rory Burns, Benny Howell and Tom Bailey are among the unfortunate omissions. Daniel Bell-Drummond, Sam Hain, Liam Norwell, Lewis Gregory, Jamie Porter and Ben Coad join that list but I was generally plucking for the most experienced players.